I have just come back from one of my annual visits with a bunch of trusties to the wilds of Argyll and the fabulous fishing that is Loch Awe. But the trouble with going away for a weeks solid fishing is all the “last week at this time” sort of stuff cos it really is a different world up there and I love it.

We arrived to a warm welcome at Ardbrecknish House on the Saturday afternoon and after getting the boats on the water I wandered round to catch up with some old friends, meet some new faces and see what the fishing crack could tell us.

“Not much about, its a bit slow” ,from a dejected looking piker packing his rods away

“a few jacks but not much else” were the replies to the obvious questions and I smiled.

Not wanting to sound smug we do generally get more than our fair share of fish on these trips and after years of exploring we have several places which seem to produce the goods so I was not overly concerned by the comments This year was no exception and over the week we had 53 pike including Andy Macdonalds’ 20.12. I had a 19+ while Phil Done had to be content with some really fabulous mid and upper doubles including the one below at 17.12. The bigger fish had recently spawned and would both have been well in the twenty pound category but the others were unspawned pike and what fish they were. Long sleek and incredibly powerful, providing epic scraps and adrenaline packed moments as they tried to get to the anchor rope.

To enable discussion in the Ardbrecknish bar afterwards without revealing just where we are catching, we have developed a code for the various locations- hence ‘Amsterdam’ is at certain times of the year full of weed and sex as its a spawning bay, but we also have Quiet bay, Rotterdam, Fair do’s, The Snag pit and others. This year we caught from a whole range of locations and some of the finest fish came from newer areas which is always a bonus instead of pounding the usual spots.

We also visited our back up water where Stuart watts had a great day of 15 runs and Phil nobbled a few on lures. But in the end it is not just the epic fights but the locations and the crack. The island lunch amidst drifts of bluebells, with Andy and Leonie Patterson, their mega Paella followed by an evening of tall tales and laughter recalling epic catches of the Gazebo and the corpse! Then music till the early hours, bed and more fishing. All in a water scape where the only noises are wind, water, birdsong and the sound of a baitrunner, or is it a grasshopper warbler?

And did I mention it was the warmest place in Britain for a few days?

Roll on the next one! 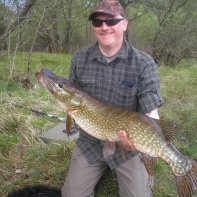 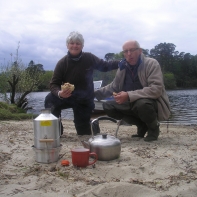 Lunch with The Pattersons 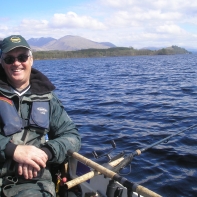