And as I write this little missive a week or so before the grand festive season there is snow on the ground, the fells are white and all the boats are off the water. Looking out of the window there is a christmas card style view across the valley and more than a hint of winter in the air. On a morning such as this skis and sledges make more sense than fishing rods although looking back down the seasons I have often done very well when pike fishing in the snow..

It has been an unusual back end of the season though as we have had plenty of good old Windermere pike but more smaller ones than is often the case. Typically on there we do get a fair number of the fabled twenty pounders but this year the average size has been lower than we have come to expect. Perhaps it’s a cyclic thing or maybe some of the bigger fish have ended on a slab somewhere as a festive meal. Whatever the reason it is good to see such a lot of fifteen pounders growing on and bodes well for the future. As regular readers will know I lift the boats off the water at the end of November until around Valentines day as the weather is just so unpredictable in winter.There is nothing worse than sitting in the cafe at Waterhead drinking coffee and apologising to anglers who have (like me) been looking forward to a days piking when the weather has turned bad and four foot waves are barrelling down the lake. So I lift the boats off till spring..

Down the river, trout and salmon are all busy spawning high up on the tributaries and reassuringly we have more salmon coming up to spawn than have been seen for many years. As long as they make it back from their long migration in similar numbers all will be well but they face many perils on the journey northwards to the ocean feeding grounds and it is estimated that only four in a thousand actually make it home to lay their eggs in their native streams. Miraculous that any survive given the number of predators who like eating salmon of all sizes.

So with all tucked safely in, snow on the ground and skeins of geese passing overhead on their way to graze the pastures beside Bassenthwaite, I shall just say Merry Christmas and wish you all a peacefull and healthy new year. 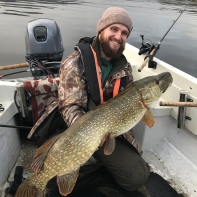 Not all small ones though- 23lb..Nice! 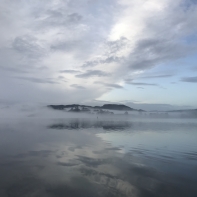 it's not just about fishing 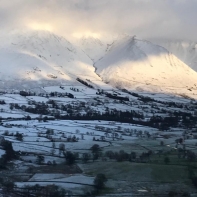