I was up in the wilds of Argyll the other week with a few good and trusted trusted men and a couple of fast boats. As usual we were mostly in search of the legendary hard fighting pike that inhabit those parts, but a day on the high lochs hunting wild brownies was also in the plan. Previous trips have convinced me that Scotland on the whole does not really like me, having seen inside at least five local A and E departments due to accidents and incidents while up there so I was very careful in the run up to the event .

As it happened this years tragedy came from very left field when Roe Dog, my old and trusted fishing labrador took ill on the morning of departure. Off to the vets at eight and the call no-one wants to hear came through later that afternoon .As the years roll on, I ‘m learning to cope with deaths and funerals, but a loyal dogs departure is different and hurts on a very deep level, so it was a very subdued Eric who sat on the shores of a few Scottish lochs during the warmest Easter in ages.

At least the weather was kind this time. Previous outings have seen us battling appaling weather with gales snow and blizzards but this year was different and in spite of easterly gales…we had sunshine…and fish!!!.

I’ll not bore you with the tales of derring do as another highland pike tail walks across the water for the fourth time in as many minutes, or the thirteen dropped or missed runs one morning when they were behaving badly. This dropping of runs seems a characteristic of highland pike on some days when they seem determined to travel with the bait held gently at nose end almost as a house clearance, and it is very frustrating but we eventually cracked it. One of the best fish came to ‘The man from the Ministry’ on a dead bait and as often happens the pike kept fighting the angler on the unhooking mat . Hence the blood in the picture which is not pike damage but blood letting of A rhesus negative from Chris’s hand! These fish are tough creatures and do not give up fighting until safely back in the water. Nowhere else on the planet have I met such agressive fish and even when holding them for a quick picture you can feel them tensing and preparing to have another lunge at the captor.But they are true battling tigers and on the right day very obliging and a great challenge. Over the week we fished one home water and a couple of new ones and all produced runs and fish. No real monsters but several mid doubles that gave us a right old run around.We could have had over two hundred pike if only they had all stayed on!!!! As it is I’ll settle for half that number to the net. But it’s the peace, the quiet and the wildlife and the cameraderie that make it all worth while. And in spite of claims this was to be my last visit up there….I’ll be back!

We even saw a white tailed Eagle as well…WoW 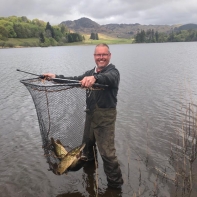 WE need another net!! 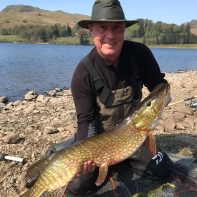 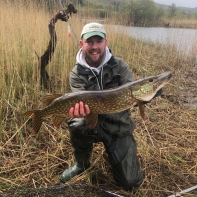